When I was coming home yesterday walking up the stairs, I was thinking, someone famous once said: “every society could be judged on the basis of how it treats women”. I suddenly thought: “Every society can be judged, from how it treats ‘mad’ people.”  Then my thinking jumped and I thought: “how it creates madness”.

And my (nearly) final conclusion was: “every society can be judged, from how it creates and treats it’s mad”.

Then I thought: feminists have rightly criticized the word ‘treat’ – and the idea, which is implied, that women are not part of the society. Because the original statement implies, that the society is male and women are external to it, some kind of ‘objects’ – to which the male-society relates: men ‘treat’ women.

There is already so much wrong expressed in these words. I always hated when men said “I treat my wife/girlfriend really well”. I usually have a feeling that they are talking about a dog, who should feel privileged. – All of these thoughts and ideas swam, or rather, rocketed through my head while I was making the steps upwards.

The next thought was: ‘judged’ is the wrong expression. I asked, who am I to judge? Or who are supposed to be the judges according to the original statement? Are they not part of the society? What makes them either outsiders or superior beings, above everyone else, and independent?

I concluded quickly: instead of ‘judged’ I could say: “Every society has it’s own typical way of ‘treating’ and creating it’s women and it’s mad.” Societies create role models for women and they use various methods to force the individual women to conform to these female images. Societies also create their own concepts of ‘normality’ and ‘madness’, and they offer typical mad-roles. 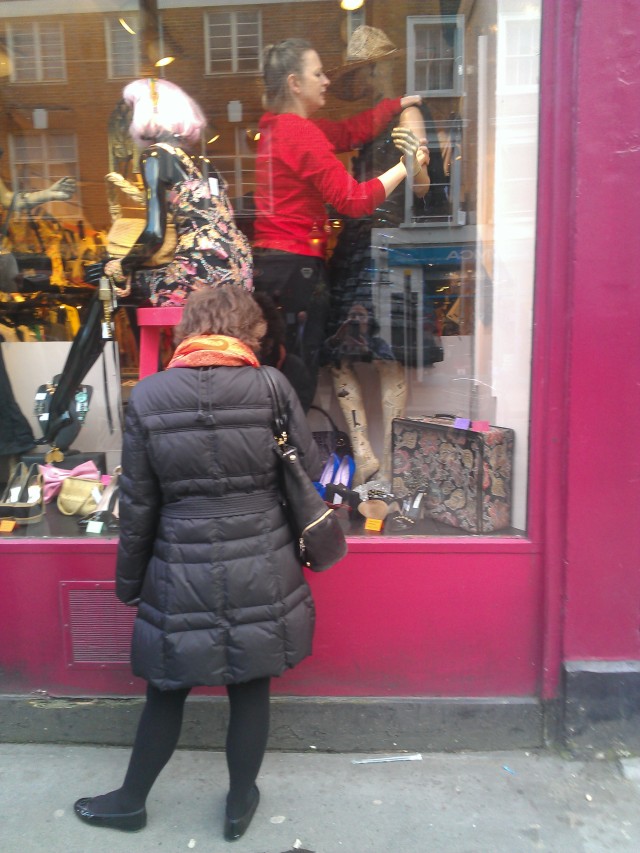 I started to laugh. Because at this point, I realised, it was not only self-evident, it was banal!Of course it has. It also has it’s own way of creating male roles, children-roles, cities and hierarchies, customs and memories. Nothing seemed more obvious, I thought, and felt ridiculous for thinking about the whole subject. I arrived in front of my flat, opened the door, said a loud hello to my kids, and shut my brain.

(I wrote this piece sometimes in the 1990’s when I had three small children and I was working as a mental health social worker in Central London. We were living on the 2nd floor of a large Council building so all these thoughts went through my head during the 2 minute it took to walk up from the ground floor to our flat.)

5 thoughts on “Walking upstairs I was thinking”